In 1992, FINCA was working exclusively in Latin America and I had not given much thought about expanding to other parts of the world. Then, out of the blue, came a call from a woman named Shelley Franz from Minneapolis.

“I have a friend from Uganda who heard about FINCA’s work in Latin America and he says FINCA is exactly what his little village in Uganda needs,” she told me. “What would it take to get FINCA to Africa?”

I had been to Uganda before, as a consultant to the UN Capital Development Fund, a few years earlier. I loved the country and would have gone if someone paid half my airfare. But, no, I thought I better ask for some real money so I could fund the loans.

Although I didn’t think in these terms back then, this was the power of the FINCA brand (Warmth, Trust, Responsible Banking) in action. It turned out that Uganda was the perfect place to replicate the success FINCA had in Latin America. 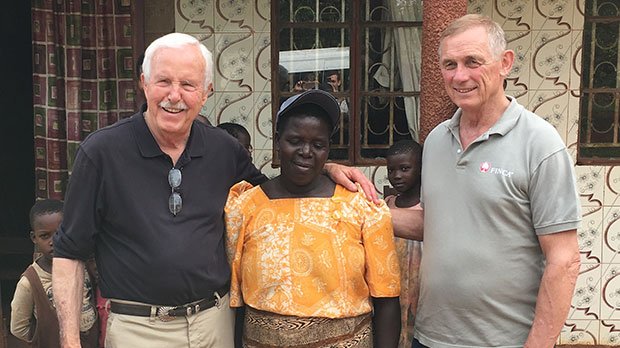 A quarter of a century later, our FINCA Uganda clients have surpassed our wildest expectations by building thriving businesses that help to improve their lives. During my latest visit, to mark the 25th anniversary of our work in the country, I met with a number of them, including 15 women from the village of Kimanto, Iganga, who formed the first village bank 25 years ago. They spoke of their accomplishments, including successfully putting their children through the education system, expanding their crops and livestock herds, and improving their homes and local school.

We also met with Annet Kintu, a FINCA client in rural Jinja, who had purchased a solar-powered lantern and a fuel-efficient, clean-burning cookstove from our company BrightLife, which sells affordable products that greatly enhance the standard of living of the very poor. Annet testified to the enormous difference these two low-cost products, had made in the quality of her life, and to the way they were also saving her hundreds of dollars a year in fuel costs.

Back in Kampala, we met with a long-time FINCA client Elizabeth Kiyimba who took us into her impressive home, which she had built with the help of a series of loans over the course of several years. Pictures of her six children in their graduation caps and gowns adorned the walls. She had a piggery as well, and several acres of crops.

“We took our time building this house and expanding our crops,” she told us. “We never wanted to borrow too much and have problems with the payments.”

Towards the end of our visit, one of her sons showed up with his two young children. He said he was an artist. I asked him where he sold his paintings. He shook his head. “I don’t sell them,” he said. “I give them away to the poor people, and they sell them.”

The strength of the relationships FINCA Uganda has created with our clients was evident in these encounters, embodying our values of Warmth, Trust and Responsible Banking. Seeing first-hand the transformational change that 25 years of support has had in these communities reminds me that we are on the right track.